The quantum Hall effect has been a rich source of novel quantum phenomena over its thirty-four-year history: the combination of topological order and strongly correlated non-Fermi liquid behavior gives rise to dissipationless edge currents, fractionalized statistics and a slew of other interesting features. However, realizing the fractional quantum Hall effect (FQHE) in the conventional setting of a high-mobility semiconductor heterostructure in a high magnetic field remains experimentally difficult. In recent years, the field has seen a surge of interest from proposals for realizing FQH phenomena in lattice systems, without the need for a large external field: so-called fractional Chern insulators (FCIs) [1-2]. These states have the potential to be stable at room temperature, and there are many possible routes to realise them experimentally. FCIs also raise theoretical questions independent of their experimental interest: notably, FCI phenomena constitute a non-trivial and poorly-understood generalization of the FQHE in which lattice effects are significant.

Our group has taken some important steps towards the development of a unified theoretical treatment of FQH-FCI phenomena, with our work falling into two broad categories. In the first strand, we have identified band geometric features (including the Berry curvature and quantum metric) as important factors in determining the suitability of a lattice model for realising FQH physics [3–5]. In the second strand, we have applied these ideas, and others, to the study of specific FCI models, with a particular focus on the Hofstadter model [6–7].

Figure: (a) The Haldane honeycomb (HH) model [25], an example of an FCI. (b) The band structure of the HH model, with parameters chosen to generate an extremely flat lowest band.

The basic theoretical puzzle posed by FCIs is to provide a microscopic description of their physics. A number of theoretical works have attempted to bridge the gap between FCIs and FQHE including adiabatic continuity of Wannier functions [8–9], the extended Hamiltonian formalism [10], parton/slave particle treatments [11] and attempts to characterize interactions using pseudopotentials [12–13], among others. While these approaches provide a number of useful insights into the problem, they generically don’t distinguish between different single-particle flat band Hamiltonians; however, numerical work [14–15] has found that single-particle effects can strongly influence the stability of FCI phases. In an effort to better understand these single-particle effects, our group has taken several important steps towards the development of a unified theoretical treatment of FQH-FCI phenomena.

In the context of the usual FQHE, the algebra of density operators projected to the lowest Landau level closes at all orders. As noted by Girvin, MacDonald and Platzman (GMP) [16], this plays an important role in the explanation of the stability of the FQHE using the single mode approximation, which is the ansatz that the most relevant low-energy neutral excitations of the FQHE are collective density waves (magnetorotons) generated by the action of projected density operators on the ground state. In [3], we noted that an isomorphism of algebras would lead to identical low energy physics, and thus would explain the stability of FCI states. By examining the algebra of Chern band projected density operators, we found that this algebra closes at long wavelengths and for constant Berry curvature, whereupon it is isomorphic to the W∞ algebra proposed by GMP. For Hamiltonians projected to a single Chern band, this provides a route to replicating lowest Landau level physics on the lattice.

Inspired by previous work on the W∞ algebra, our group further investigated the suitability of lattice models to support fractional Chern insulator states.
Given a family of normalised vectors, in this case the Bloch wavefunctions, a natural way of defining a distance measure [30] is the following:

We found that this quantum metric plays an important role in the stability of lattice models. Rather surprisingly (see figure), we discovered that a complete isomorphism of algebras between the FQH and FCI cases can be obtained if only three conditions are satisfied. These conditions are that the Berry curvature B(k) and quantum metric defined above should be constant over the Brillouin zone. The third condition is that

In Ref. [4] we showed that D(k) is always nonnegative, and that the resulting metric determinant inequality D(k) ≥ 0 measures deviations from lowest Landau level physics, specifically, unlike the first two conditions. When these three conditions are met, that the commutator of two projected density operators has a modified GMP form. Since it impossible to obtain perfectly uniform Berry curvature in models with local hopping and a finite number of bands, we conjectured that a deviation of D(k) away from zero should act to destabilize FCI states on a given lattice model. We also proved the related identity

and showed that T(k) = 0 implies D(k) = 0. This identity, which doesn't seem to have been noticed before, connects the two most important quantum geometric features, the Berry curvature and the quantum metric. The vanishing of the metric trace inequality corresponds to the stronger condition that the algebra of band-projected density operators is identical to the LLL GMP algebra, rather than just isomorphic to it.

Figure 1: Contour plots of the distribution of Berry curvature over a unit cell of the reciprocal lattice for the Haldane honeycomb model [23]; this unit cell was chosen so as to not split up the Brillouin-zone corners, which appear to be points of high Berry curvature. The same color scale is used in each panel.

The theoretical work in Refs [3–4] led us to propose a “geometric stability hypothesis,” which states that an approximate version of the single-mode approximation remains valid in FCI models, and that curvature and metric fluctuations along with the trace inequality are the relevant parameters measuring the deviation of a single-particle lattice Hamiltonian from Landau level physics. In Ref. [5] we conducted extensive numerical simulations on a scale beyond anything carried out in previous literature, comprehensively sampling the parameter space at thousands of values for three of the best-studied FCI models. Using a two-step sampling procedure, we were able to distinguish the effects caused by fluctuations of the Berry curvature and Hilbert space metric; the manuscript is the first work to demonstrate the importance of the latter factor.

Our work identified the quantum geometry of bands as the dominant factor determining the stability of FCIs in practice, which provides the first steps toward a unified theoretical description of FQH and FCI physics. Remarkably, we found that easily computed, single-particle quantities could be used to accurately estimate the parameters maximizing the gap of the interacting many-body system—it’s rare that one can find any computationally tractable behavior in a strongly correlated system, by its very nature. This could provide a significant shortcut to the design of laboratory realizations of high-temperature FCI states. Note that the notion that the gap would have any dependence on single-particle behavior is impossible to explain within the context of the continuum FQHE, in which the gap is entirely due to Landau level-projected interactions.

Figure 2: Summary of band geometry results obtained in [5] for the Ruby lattice FCI model proposed in [24]; qualitatively similar results were found for other models. (a) Ruby lattice and convention for chiral hoppings. (b) Band geometry for parameters minimizing the many-body gap for N = 8 bosons at half-filling. Eigenvectors of the quantum metric are plotted as ellipses, with coloring determined by the fluctuations of Berry curvature from its mean value. (c) Berry curvature fluctuations σB versus gap for 2500 parameter values in the FCI phase. Insets: Fluctuations in quantum metric (σg) and averages of determinant and trace inequalities for Hamiltonians constrained to have a fixed value of σB. A clear linear trend present at low σB is washed out when curvature fluctuations are higher.Model Systems

Perturbative Approach to Flat Chern Bands in the Hofstadter Model

The Hofstadter model [17–18] describes a charged particle hopping on a lattice in the presence of a magnetic field, and is noted for its fractal energy spectrum.  Recently, the model has generated renewed interest as a system that bridges the gap between the continuum quantum Hall effects and lattice-based Chern insulators. In Ref. [6] we pursue this connection in detail at the single- and many-body level.  In the process, we draw connections to recent experimental realisations of the Hofstadter model [19–20] and, significantly, make analytical progress in a field that has mostly been the subject of numerical studies. The method we present is a general approach that can be applied to a variety of interactions, lattices and parameter ranges.

Using a semiclassical analysis, we derive non-perturbative expressions for the wavefunctions, energy dispersion and Berry curvature of the low-lying bands.  As our small parameter, we use the deviation in magnetic flux density per plaquette from a simple, rational fraction (measured in units of the flux quantum).  This allows us to consider a lattice with a low flux density, which connects to the continuum limit, but also allows us to consider higher flux densities for which there is no nearby 'continuum'. In the low-density, perturbative limit we find that the lattice states and energies map smoothly onto the Landau levels of the continuum.  At higher flux densities we find a sublattice structure that maps onto several copies of a continuum Landau level. In this way, we are able to quantify the importance of lattice effects in experimental settings, as well as predict what would be observed at higher field densities.

To study the many-body physics of the model, we turn to the toolkit of Haldane pseudopotentials [21]. The many-body wavefunctions at low-field values take the form of perturbed Laughlin states that share the $C_4$ symmetry of the lattice. At higher magnetic field values, the ground state bosonic wavefunctions in the presence of a contact interaction become perturbed, multi-component Halperin states [22]. 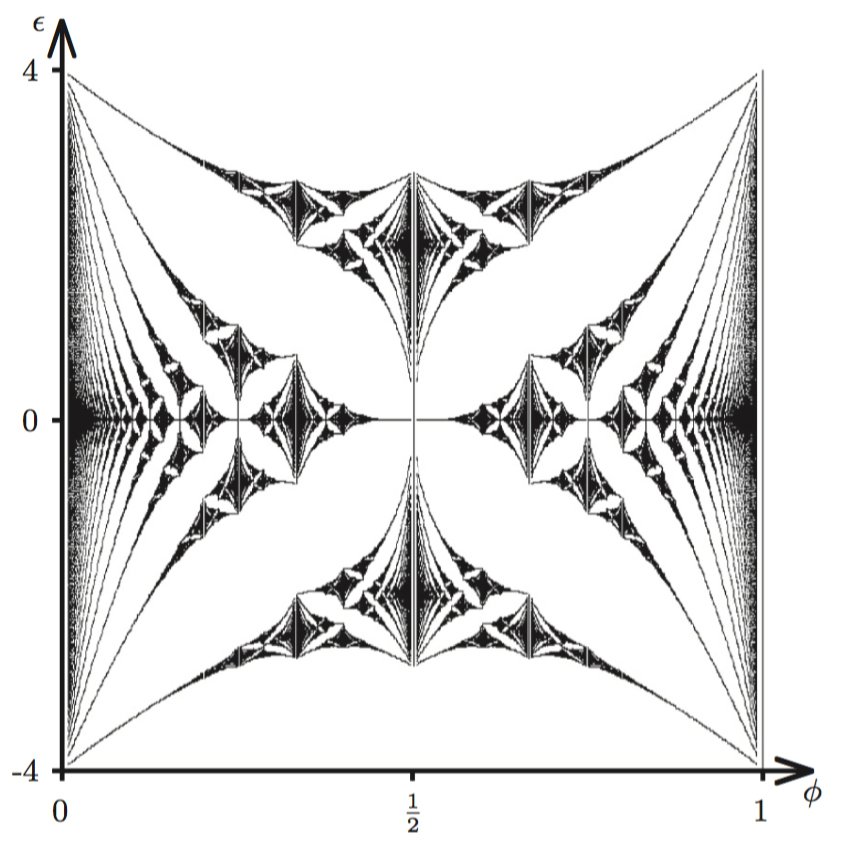 Figure 3: Hofstadter’s butterfly shows the fractal spectrum of the Hofstadter model (with energy ε) as a function of magnetic flux per plaquette, φ. The entire pattern repeats for flux filling outside of the range 0 to 1. Landau level-like lines can be observed near to the points (0, -4) and $(1/2, -2\sqrt{2})$, for example.

The perturbative study of Ref. [6] suggested that the Hofstadter model would provide an exciting setting for studying the relationship between geometry and FQHE physics in a controlled fashion. Motivated by the geometric stability hypothesis [5], in Ref. [7], we further studied the geometry of the Hofstadter bands in the small flux per plaquette limit. We found that, as with the dispersion and Berry curvature, fluctuations in the quantum metric are exponentially suppressed as the magnetic flux decreases. In contrast, the deviation from saturation of the geometric inequalities falls off polynomially. This suggests that these inequalities are the dominant measure of closure of the density operator algebra near the continuum limit.

Continuing this line of reasoning, we also studied the many-body physics of interacting particles fractionally filling the bands, since we expect the density operator algebra to tell us about the stability of the FQH state to excitations. We found a correlation between the degree of saturation of the geometric inequalities and the size of the excitation gap above the many-body ground state. This provided further evidence in a controlled setting that geometry of single-particle bands can be used to predict the many-body physics of particles in these bands.

Cumulatively, along with our previous work, these results increase our confidence in the ability to predict the regions of parameter space that are most favorable for forming FQHE states. This has experimental implications in that one can calculate a priori parameter values that optimize geometric quantities and hence are more likely to lead to stable FQH phases.

In multicomponent QH systems at integer fillings, ground states that have topological order and also spontaneously break symmetries can arise, a phenomenon termed QH ferromagnetism (QHFM) [26,27]. An important feature of such states is that the broken symmetry can persist to nonzero temperatures, even as quantum Hall order is lost, as in the celebrated case of bilayer systems at filling factor ν = 1[28]. In Ref. [29], we studied the interplay between quantum Hall ordering and spontaneous sublattice symmetry breaking in multiple-Chern-number bands at fractional fillings.