A famous theorem due to Lieb, Schultz and Mattis [1] states that a one-dimensional spin chain of half-integer spins and a rotationally-invariant Hamiltonian must have gapless excitations in the thermodynamic limit. This result was later generalized to one-dimensional systems with translational symmetry, conserved particle number and either parity- or time-reversal invariance. In a set of beautiful papers, Oshikawa [2] and Hastings [3] generalized the Lieb-Schultz-Mattis theorem to higher dimensions using a variant of Laughlin’s gauge argument for the QHE [4]. These results showed that at fractional fillings per unit cell, systems with translational invariance and a conserved U(1) charge would necessarily have an excitation gap that vanished in the thermodynamic limit. One consequence of this result is a commensurability condition for spin systems which accounts for a majority of observed plateaus. A spin S system with average magnetization m and n spins per unit cell can have a magnetization plateau with a finite excitation gap only if n(S − m) was an integer.

While these results apply only to fractional fillings, two recent papers, Refs. [5, 6] (the first by our group) generalized these results to integer fillings by showing that for a large number of crystals, there were necessarily gapless excitations in the thermodynamic limit even when the filling was commensurate. For spin systems, these results imply gaplessness even when the commensurability condition of n(S − m) integral is satisfied. For every nonsymmorphic space group, these works established that there were necessarily some integer fillings at which there was an excitation gap which vanishes in the thermodynamic limit. States which do not break any symmetry and have no gapless excitations must necessarily be topologically ordered. Since nonsymmorphic groups are actually more numerous than symmorphic groups and crystals with these symmetries occur extensively in nature (for example, the diamond lattice), these results may have widespread applicability.

While Ref. [6] only applies to systems without spin-orbit coupling, our work accounts for these as well. We also demonstrated that for all but two of the 157 nonsymmorphic space groups, there were special values of fluxes inserted through the holes of a periodic system at which the ground state multiplet had a minimum size necessarily greater than one. These correspond to points in k space at which the appropriate little group has higher dimensional representations. The fluxes for which the ground and excited states become degenerate can be computed exactly (unlike the arguments of [2, 3]). It might be possible to use this fact to improve the bounds on the excitation gap as a function of system dimension.

These results on symmetry-enforced degeneracies may be seen as generalizations of band touching theorems [7, 8] to interacting systems. For instance, the figure below demonstrates protected band touchings at the X point in the Brillouin zone of diamond. It would be interesting to explore if these methods could be used to generalize other similar band theory results to interacting systems. 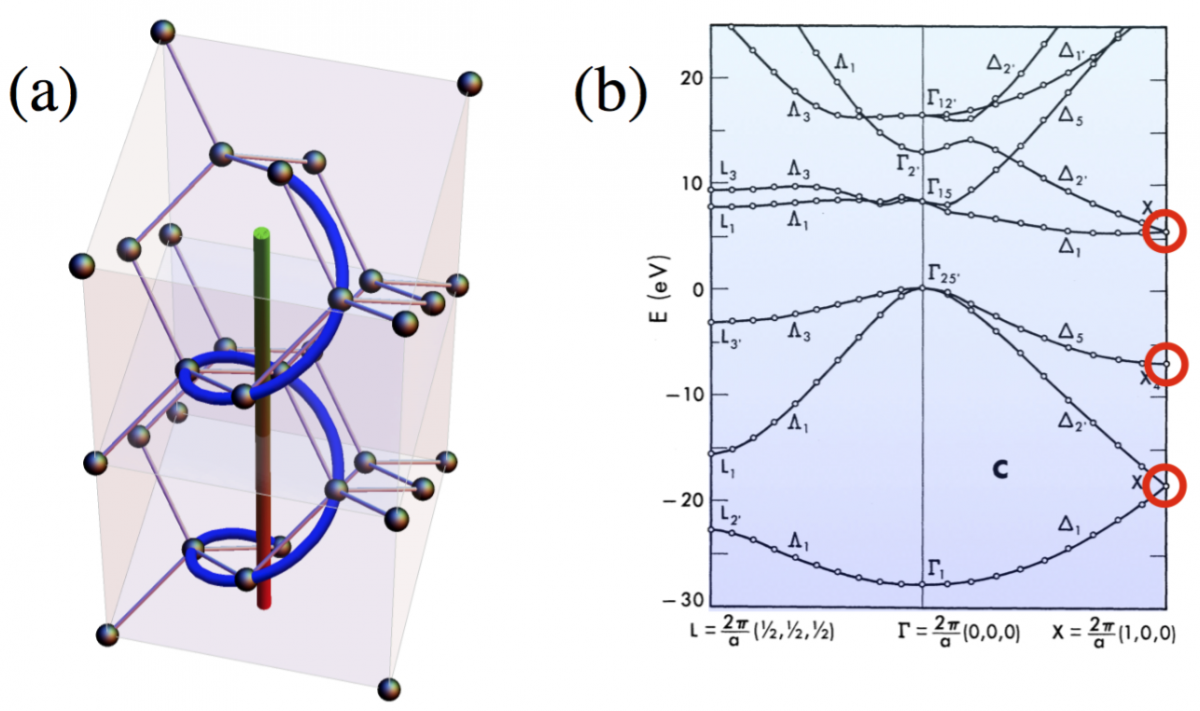 Figure: (a) Diamond crystal structure (an example of a nonsymmorphic space group) showing one possible screw transformation (blue spiral): this is the combination of a translation and rotation around the red-green axis. (b) Band structure of diamond [data reproduced from [9]]. Band touchings are indicated with red circles; the 5 band is multiply degenerate. At the X point, these degeneracies are exact and protected by the crystal symmetry group.